Troubled Archives is a collective name for the work of Rokia Bamba, Loes Jacobs, Michael Murtaugh, Peggy Pierrot, and Antje Van Wichelen. Photos and links to work of the collective are available at: http://vandal.ist/2019/noisy_images_trm/ and http://www.primitives.constantvzw.org/

We take this call about 'Archive is power' as the start of a collective writing session to address the concerns of our Troubled Archives works. The form of the publication will be an active one, with voices, quotations, sounds, reactive images, etc...

What troubles the archive? How can artworks address the troubles? How can they give the public agency to talk back?

Troubled Archives develops an artistic research for an engaged way of dealing with problematic imagery. Throughout the process of creating new artworks the question of regaining power, shared among racial and colonial power lines have been at the center of the work. Regaining power on the colonised, black, brown, and asian bodies, regaining power on history, regaining agency on both sides of the color line.

“I've been struck by Antje's parents comments [during the debates]. I felt like they also have been denied agency about the big others, as their own relation has been mediated by the colonial power gaze through schools, press and other dominant culture apparatus.”, Peggy on a public debate in Brussels.

How can artistic work on different hidden image archives be used for a collective thought process, as an attempt for questioning powers and the lack of power, and also as a tryout for building a new collective agency for shared futures?

Museum visitors could have their photograph taken in the Recognition Mahcine's photobooth. One copy of the image strip could be placed on boards mounted on the walls around the machine -- the photos become a new archive. 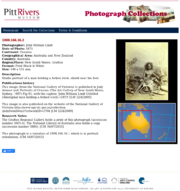 NEVER WILL ANOTHER PERSON OR NUMBERS BE ABLE TO DETERMINE ME, Reponse posted from a visitor to the Recognition Machine website

Troubled Archives is a platform that can and needs to change and adapt at all times. We use images from the ones who were in power and who decided on how the image of the other was constructed; these images were repeated over and over until it they became 'the truth’ and then The Archive.

How to share these images without repeating their inherent violence? How to comment on them by using and/or altering them?

"It is not because you take it [archival images] in to the art machine, that it makes it okay”, Grace Ndritu during a public debate in Brussels.

“I remember very well this moment that I discovered the series of filthy photographs. (…) It was recognizing an image that you have never actually seen. It was recognizing that this image is a fundamental part of our societies cultural DNA - our Archive. (…) Now, how to operate?”, Antje on her research in colonial archives.

The added value of the artistic regard on the archive interests us for it allows us to point the finger and open a space for awareness, connection and discussion that the dominant territories of political conflict refuse to address embedded as they are in the web of a system of justification serving capitalist production. Troubled Archives aims to work as a platform where all can see the continuum, that links the exploited bodies of yesterday to those of today, unfold in front of our eyes.

Our 'new' archive stays troubled. This collective writing exercise has the intention to address the troubles.