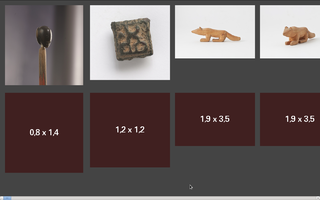 One of the first step one makes to understand a series of documents is to order them. But beyond the sense of control it gives, each ordering tells a different story of the archive. Listing all the elements by id reveals the internal index the database maintains to keep track of the information. The ordering by id also talks about the human labor of “feeding the system”. These elements were introduced one by one, by one or more people when they were available to them. And the succession of ids reflects the succession of inserts in the database.

If we align the elements by the time the photos were taken, we can see another dimension of the human labor, the time it took to capture all the documents, the gaps between the shots, what items were photographed together. We can imagine the body of the photographer, if he or she was far from the document, the slowness of taking these precise images, the time it takes to adapt the setup for the next document, the care and patience.

Focal length, aperture do give us detailed informations about the technical configuration of the camera for each photograph and these measures remind us that the various documents have required each a different attention as some of them were pale and contained shapes and colors with low contrast where others were clearly distinct from the background.

Orderings tell us a story about dimensions, which are the salient objects when we measure the physical documents and which ones come first when we look at the heaviest file sizes?

These digital images are made of pixels rich in color informations, but how can one “order” by color? What is a significant color information? Contrarily to human intuition, for a computer, a white image is an image saturated with red, blue and green. To find the images that look the most blueish, that appear most red or green we counted only the color values that were superior to the others by a certain threshold. For instance, we recorded blue information value only when it was significantly higher than the red or green channels values. Ordering is then not only following the raw values coming from the digital objects but already transforming them in dialog with a certain understanding of human perception.

Different orderings reveal that we have no direct access to the archive and its documents. We only access it through a dialog with interlocutors. Different orderings make the interlocutors speak to us. Interlocutors can be human or software agents like computer programs installed on a server or embedded in a camera. The work of creating, maintaining, and transporting the archive, including inevitable glitches, misunderstandings, and misplacements, they are inescapably a part of the reality and identity of the archive. Each ordering suffers from its own deficiencies, has its own glitches, holes, and blindspots. A different photographer, a different camera, an error when uploading a folder, an expired license in a software package. An error in the transcription of measurements appears at the end of the item's dimensions ordering: the modest drawing becomes a giant hand. Three images are duplicated, but their file size varies. Which one is the proper reference? In isolation the blindspots could threaten to distort one's understanding of the archive. At the same time, the "cleaning up" of missing or broken data introduces it's own blindspots, a revisionism that aims for a completeness that doesn't exist. The imperfections of the orderings when taken together can (hopefully) convey something of the richness and complexity of the whole.

When counting the faces present in the pictures, our interlocutor, a computer vision program implementing the Haar Cascade algorithm, misinterprets once in a while an image and detects a face where there is none. It creates a false positive. But the very reason of its weakness (being too eager to recognize as a face a shape that contains features with a strong symmetry) is also the reason of its strength as it can distinguish a face in a dadaist collage or in a hastily drawn sketch. The interlocutor doesn't have the truth about the archive, but along the conversation it opens our eyes and speaks to the part of us that looks at the clouds and sees faces.

Thus in total there appear to be 1414 unique images in 2 folders (Resten, Bilder Silje).

These are results using the "SIFT" (Scale-Invariant Feature Transform) analysis for automatically detecting "interest points" in an image.

Scale-invariant feature transform (or SIFT) is an algorithm in computer vision to detect and describe local features in images. The algorithm was published by David Lowe in 1999.